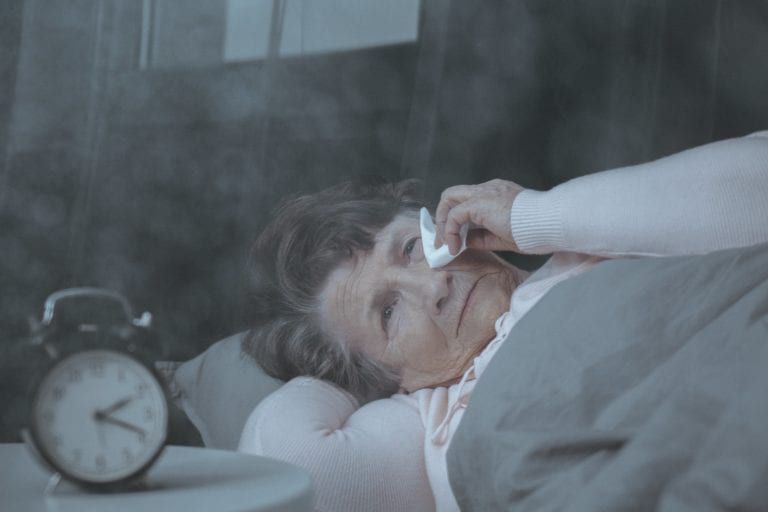 Alzheimer’s Disease is one of a number of ailments that all fall under the term Dementia, diseases that cause the steady degradation of social skills, emotional reactions, and other cognitive functions such as memory. As time has gone and studies performed it has become increasingly apparent that dementia and sleep disorders are closely tied, with some speculation that sleep disorders may actually be an aggravating factor for some forms of dementia.

What Is The Relationship Between Sleep Disorders And Dementia?
Recent studies have shown that dementia is a relatively common occurrence in aging men and women, with 1 in 10 men and 1 in 6 women developing symptoms of dementia in the years after 55. Of these men and women, up to 70% of them will be affected by Alzheimer’s, with the other 30% presenting with other forms of dementia. While the current number of Americans with Alzheimer’s is shown to be 5.4 million, this number is expected to almost triple by 2050. While Sleep Disorders do not seem to be directly causal, it is clear that those who suffer from sleep disorders do tend to have more frequent and severe episodes.

What Kind Of Symptoms Of Sleep Disorders Appear In Dementia Patients?
There is a condition among those with dementia known as “Sundowning.” As the name implies these patients exhibit greater daytime sleepiness, have a tendency to wander during the night and experience heightened levels of agitation and confusion. Current medical wisdom suspects that these behaviors are tied to senior citizens early circadian rhythms. REM Sleep in those with dementia tends to decrease as the disorder advances, which is also potentially related to sundowning.

Is Insomnia Ever Indicative Of Oncoming Dementia?
Difficulty with sleeping can be an indicator that there are mechanisms in motion that will lead to cases of dementia. It is common for those developing dementia to see changes in their sleep patterns, in some cases what would typically be a 20-minute nap during the day stretches on for hours. For those elderly who are complaining of restless nights, increased sleep aid use and daytime sleepiness it has been shown that there is an increased likelihood of their developing Alzheimer’s symptoms within the following two years.

How Hard Is It To Diagnose Dementia Patients With Sleep Disorders?
Unfortunately, this can be quite a difficult process due to the number of potential causes for sleep disorders. There are four categories of sleep disorder which including insomnia, hypersomnia (too much sleep), apnea or nighttime restlessness, and behavioral problems and nocturnal hallucinations. Dementia patients may show signs of more than one of these at a time.

If you have a loved one who’s suffering from dementia or who you suspect may be experiencing a sleep disorder, pick up the phone and call Markita Thompson at the Infinity Hope Center in Detroit, MI. They’ve been helping families with loved ones struggling with a sleep disorder, and dementia understand their condition and help them live full and happy lives in their Autumnal years.